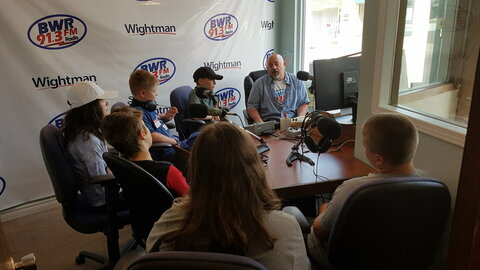 It all started with an idea from a councillor that turned into a great success and a great partnership.

Councillor Fitzsimmons had a thought about Launch Pad and Bluewater Radio and how great the two organizations would be working with one another. It didn’t take much convincing with Launch Pad’s Executive Director, Emily Morrison and Bluewater Radio’s CEA and Station Manager, Andrew McBride. Soon the wheels were turning for ways for them to partner together.

3-2-1: It’s Radio Time was created by Emily and Andrew; a three-day summer camp that would teach six youth the ins and outs of the radio station, along with other skills that they were sure to walk away with.

“(The camp) went very well!” Andrew stated after the end of the three days, “It was the first time we had that big of a group in and it was kind of cool.”

This camp took the youth and put them in the Bluewater Radio Studio where they learned microphone technique, editing and something as simple as what a radio stations main purpose is, which is to entertain and to inform.

“It was fun seeing them use the microphones at first, because the thing that struck them was hearing their own voice back. They had never heard it and they aren’t used to hearing what they actually sound like.” Andrew explained, “They said “this doesn’t sound like me!’ but yes it does!”

A skill that the youth took with them was character development and building their confidence, and it happened in a fun environment, possibly without them even really realizing it.

“We had them on the air the first day and they were kind of timid and shy some of them, but by the time they left they were owning the thing (microphone)!” Andrew said with a smile, “Radio stations attract extraverted people, and it brings them out of themselves and they get more comfortable!”

However, it wasn’t just the six youth that were learning something. Andrew and the staff of Launch Pad took some pointers away with them that were taught by the participants.

“The thing for me is they bring a completely different perspective and a whole different creative approach. I’ve been doing this for 30 years and they come in with a different thought process altogether and look at the world through different eyes.” said Andrew.

This was shown when the youth had the opportunity to write, record and help edit their very own one-minute infomercial all about Launch Pad and the different programs they offer.

“They created the music bed themselves instead of using our generic (music) bed,” said Andrew. When asked if it was better then Bluewater Radio’s commercials, like the youth said it was, Andrew smiled and agreed. “Yea, it was pretty good!”

Bluewater Radio has over 50 volunteers, from teachers to former OPP Officers and Andrew hopes that these participants will want to continue with Bluewater Radio in terms of volunteering. “Hopefully some of them will come back and volunteer down the road.”

While Launch Pad and Bluewater Radio are two very different organizations in Hanover, their values are very close to the same. “Our mandate is it educate, entertain and inform and youth are a vital part of our community,” said Andrew.

“I was excited to partner with Bluewater Radio because my goal at Launch Pad is to get youth connected with community businesses and organizations,” Emily Morrison said about the great partnership that’s been created. “Launch Pad is determined to continue creating programs for the youth of Grey and Bruce counties that will give them the ability to gain skills they can directly apply to their futures, and it’s clear that Bluewater Radio is a place where we can do that. Being in real employer environments is essential for skill building.”

In just three days the youth were able to walk away from this camp with a sense of confidence in themselves, a new-found knowledge of the radio industry, and exciting stories to tell their friends.

“We had as much fun having them here as they did being here,” Andrew McBride.